As published in the Providence Sunday Journal, June 19, 2016.

In June 1969, sales of Father’s Day cards at La Salle Pharmacy in Providence were off by a couple dozen or so, thanks to my third-grade teacher, Miss Murphy.

Our school, recently renamed for Robert F. Kennedy, stood one block away from the pharmacy, and our classroom was on the always-hot second floor. It was there, on a muggy Friday afternoon, that Miss Murphy told our class we were going to be making Father’s Day cards. She handed out sheets of straw-colored construction paper as we fished stubby, late-in-the-year crayons from our desks.

“You don’t need to buy a card,” she said, fanning herself with one of the sheets as she paced around the room in her cat-eye glasses. “Just fold your paper in half and draw a picture of your father doing something he loves.”

I proceeded to put a band of green grass on the bottom of my folded page, a giant yellow sun at the top, and my best representation of my dad, Donald Walsh, pushing a lawn mower in the middle. I gave him blue pants and a red shirt, and put a big smile on his face. Inside, I wrote “Happy Father’s Day” in careful cursive.

Any photo of Dad in the yard performing this task would have told a different story: a squat bottle of Narragansett beer would sit on a fence post in the distance; a cigarette would dangle from Dad’s pursed lips; and there would be no smile, unless he was pushing the mower back into the shed, the weekly chore finished.

In fact, I’m pretty sure my father hated mowing the lawn. But that didn’t keep him from loving my card. He set it atop a bookcase for everyone to see.

Though widely celebrated, Father’s Day had yet to become an official federal holiday in 1969. That would happen three years later, when President Nixon signed a proclamation declaring the third Sunday in June as such. Makers of neckties, bourbon, golf clubs, and tobacco must have rejoiced.

Hallmark had to be thrilled too. Four decades later, Father’s Day remains among the most popular greeting card occasions, with people crowding the aisles in pharmacies and gift stores in search of the perfect sentiment.

Some 90 million Father’s Day cards will be purchased in 2016, according to the Greeting Card Association. Many of them will be Hallmark creations, designed to “recognize the dads in our lives with sincerity, laughter, distinctiveness, and impact.” The company’s website even provides tips on what to write in a card. I reviewed the sample messages with my departed father in mind.

“Dad, you made growing up fun!” Well, not always — certainly not that time my older brother slugged a baseball through the neighbors’ kitchen window and almost beaned their baby.

“Dad, you’re in all my favorite memories!” Well, maybe not all of them — not the first time I went parking with my girlfriend in the lot by the brothers’ residence at La Salle Academy.

“Dad, you taught me so many of the important things I know — including a few choice words for certain situations.” Bingo! My father could elevate cursing to performance poetry.

I have a stack of my children’s Father’s Day cards to me crammed into the top drawer of my bedroom dresser. I treasure them all, especially the one my son Evan made years ago when he was probably 6 or 7.

His deliberately lettered “Happy Father’s Day” sits amid earnest drawings in a rainbow of Crayola colors: a plaid easy chair with a matching green water bottle; a TV with rabbit ears; a football, a baseball, and a bat; a Red Sox coffee mug that appears to be doubling as an umbrella drink; and, yes, a lawn mower.

In my young son’s eyes, at least, I was a man of sport, leisure, and yard work.

If you’re lucky enough to receive a kid-made card today, be sure to tuck it away. Someday it will remind you just how sweet fatherhood can be.

As published in the La Salle Alumni Magazine, Winter 2015.

Brother Eugene raised his arm like a basketball referee calling a foul. He was clutching a stack of papers – our first book reports in freshman English. And then Eugene let our stapled, loose-leaf musings drop to the floor – SLAP! – and all pre-class chatter ceased.

It was not an auspicious start for an aspiring writer like me. But it was instructive. Turns out many of us had misspelled “separate” in our analysis of the John Knowles classic, A Separate Peace. From that day forward, I paged through my American Heritage Dictionary more often.

Brother Eugene’s class was just one of many experiences at La Salle that helped set me on the path to becoming a copywriter and Op-Ed columnist. Three months after graduating from college with an English degree, I landed my first ad agency job and have been writing for a living ever since.

At La Salle, I glimpsed the importance of editing from my AP U.S. history teacher, John Carpenter. He dissected my essay on Reconstruction as if it were a frog in biology class. With a red pen as his scalpel, Mr. Carpenter cut my first three paragraphs. “Here’s where you should start,” he said, pointing to the bottom of the page. “Everything above is fluff.”

I tested my hand at journalism through the Maroon & White, our school newspaper. My first assignment? A report on improvements made to the school building over the summer of 1976. I think I wrote about fresh paint, refurbished desks, and fluorescent lighting. I told myself Woodward and Bernstein had similar beginnings.

Classmate and friend Jim Phelan demonstrated the power of message repetition, a technique I have employed for clients many times. A huge fan of the band Black Sabbath, Jim graffitied the school with the lead singer’s name – OZZY in lavatory stalls, OZZY on cafeteria trays, OZZY beneath the bleachers, OZZY inside my locker, somehow. I’m surprised I didn’t find OZZY scrawled on my diploma at graduation.

English teacher A.J. Ramsey was especially supportive, overseeing my independent study in creative writing junior year. Mr. Ramsey introduced me to Gabriel Garcia Marquez and Virginia Woolf. He read my essays, short stories, and poems with patience and gentle criticism. And he revealed to me the fundamental truth about getting good at this craft: write every day.

In May of my senior year, I was among ten or so students who wrote and read speeches to be considered for our class’s valedictory address. Three weeks later, I delivered my speech during our graduation ceremony at Veterans Memorial Auditorium. It was my biggest writing milestone to date.

Earlier that day, I had received a gift from Mr. Ramsey: a leather-bound edition of Mrs. Dalloway. The first page was inscribed:

John: To teach and to have you learn – to share and to have you accept beauty – it has been a pleasure, and a life. We (you, and I, and the rest of us) are the university, once described “like a sailing ship always voyaging, never arriving.” Bon voyage, dear shipmate! – Ramsey

The Mystery and Magic of a Made-up Word

I was thrilled to hear that the Providence Journal wanted to publish my piece about wishing for a snowy Super Bowl.

But there was one glitch.

“Muckle?” Ed Achorn asked me on the phone. Ed is the Editorial Pages Editor at the Journal. “It’s not in the dictionary,” he said.

I laughed. I knew “muckle” wasn’t in the dictionary. I had looked it up, too. But that didn’t stop me. In my description of how my friends and I loved to play football in the snow as kids, I had left “muckle” in:

“We would hike up to the fields at La Salle Academy or Mount Pleasant High School, mark the end zones with our coats, and muckle each other until our cheeks and fingers were numb.”

I explained to Ed that “muckle” was the word we used when we really wanted to hammer the guy with the ball. Muckling was tackling and then some. Muckling could land you in the ER.

I offered to re-write the sentence, but Ed had a better idea. He simply referenced in parentheses that “muckle” was a “kid verb denoting violent tackling.” I’m glad he did. The piece had 570 words, but none hit home more than “muckle.”

A retired Providence firefighter emailed me: “Muckle,” he wrote. “When I saw that word, my face broke into a broad smile.” He told me how he had played football in the snow at Neutaconkanut Park in the Silver Lake section of Providence.

Perhaps “muckle” was a local colloquialism, I thought. Then another emailed arrived: “I found myself transported back 45 years to Lindell Lot in St. Louis where there was plenty of mucklin’ going on in the early 70s.”

So muckling wasn’t regional. Turns out it wasn’t exclusive to football, either. A good friend told me how a girl muckled him behind a dumpster when he was in 4th grade. Sounded better than getting muckled on the gridiron.

If “muckle” were in the dictionary, what would its etymology be? Maybe a combination of muscle and tackle. Or mug and tackle. Or mud and knuckle. Or muck and kill. That seems about right, especially in bad weather.

I gave my son, Evan, the backstory on “muckle” before he read the column. He texted me later: “Had you not said that, I would still 100% understand the usage.”

High praise for a word, especially one you won’t find in the dictionary.

With thanks to Ed Achorn of The Providence Journal. 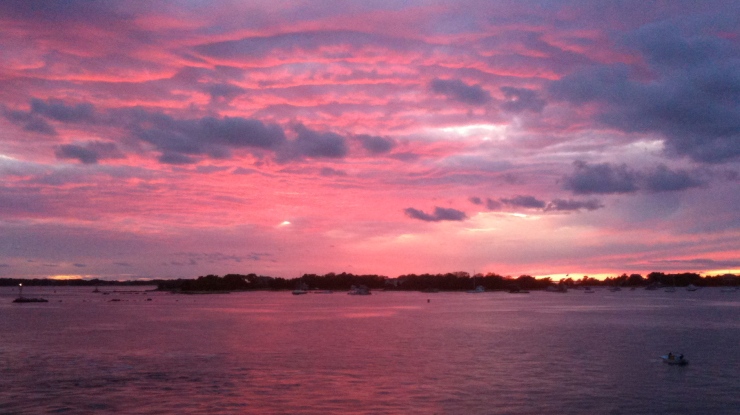 Technically, summer doesn’t end until September 22 at 10:49 a.m. But let’s face it: the start of school on Wednesday effectively put a fork in the lazy, hazy days we love. This weekend is summer’s swan song; Labor Day, its last hurrah.

So what exactly is a swan song? The term has been around for centuries, based on the legend that swans sing a beautiful song just before they die. Never mind that there’s no truth to it, as Pliny the Elder tried to point out in 77 AD. The idea proved irresistible to everyone from Chaucer (“The jealous swan, sings before his death”) to Led Zeppelin, which named its record label Swan Song Records.

Last hurrah, on the other hand, is a modern term, meaning “a final appearance or performance”. It comes from “The Last Hurrah” by Edwin O’Connor, published in 1956. The celebrated novel tells the story of Boston mayor Frank Skeffington and his unsuccessful reelection run against a young upstart. O’Connor was a Rhode Islander, a graduate of La Salle Academy, and winner of the Pulitzer Prize for Literature in 1962.

Of course, the end of summer is neither swan song nor last hurrah. The seasons continue their eternal cycle, proving that “this old world must still be spinning ’round”, as James Taylor sings. So mark your calendar: summer returns next June 21 at 1:04 a.m.