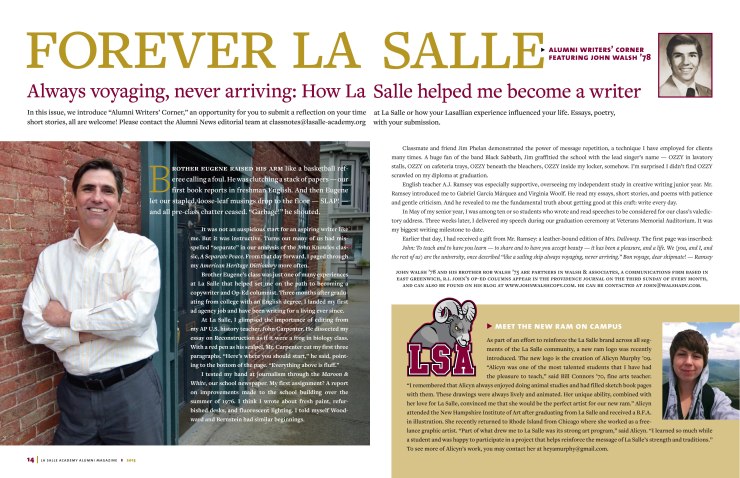 As published in the La Salle Alumni Magazine, Winter 2015.

Brother Eugene raised his arm like a basketball referee calling a foul. He was clutching a stack of papers – our first book reports in freshman English. And then Eugene let our stapled, loose-leaf musings drop to the floor – SLAP! – and all pre-class chatter ceased.

It was not an auspicious start for an aspiring writer like me. But it was instructive. Turns out many of us had misspelled “separate” in our analysis of the John Knowles classic, A Separate Peace. From that day forward, I paged through my American Heritage Dictionary more often.

Brother Eugene’s class was just one of many experiences at La Salle that helped set me on the path to becoming a copywriter and Op-Ed columnist. Three months after graduating from college with an English degree, I landed my first ad agency job and have been writing for a living ever since.

At La Salle, I glimpsed the importance of editing from my AP U.S. history teacher, John Carpenter. He dissected my essay on Reconstruction as if it were a frog in biology class. With a red pen as his scalpel, Mr. Carpenter cut my first three paragraphs. “Here’s where you should start,” he said, pointing to the bottom of the page. “Everything above is fluff.”

I tested my hand at journalism through the Maroon & White, our school newspaper. My first assignment? A report on improvements made to the school building over the summer of 1976. I think I wrote about fresh paint, refurbished desks, and fluorescent lighting. I told myself Woodward and Bernstein had similar beginnings.

Classmate and friend Jim Phelan demonstrated the power of message repetition, a technique I have employed for clients many times. A huge fan of the band Black Sabbath, Jim graffitied the school with the lead singer’s name – OZZY in lavatory stalls, OZZY on cafeteria trays, OZZY beneath the bleachers, OZZY inside my locker, somehow. I’m surprised I didn’t find OZZY scrawled on my diploma at graduation.

English teacher A.J. Ramsey was especially supportive, overseeing my independent study in creative writing junior year. Mr. Ramsey introduced me to Gabriel Garcia Marquez and Virginia Woolf. He read my essays, short stories, and poems with patience and gentle criticism. And he revealed to me the fundamental truth about getting good at this craft: write every day.

In May of my senior year, I was among ten or so students who wrote and read speeches to be considered for our class’s valedictory address. Three weeks later, I delivered my speech during our graduation ceremony at Veterans Memorial Auditorium. It was my biggest writing milestone to date.

Earlier that day, I had received a gift from Mr. Ramsey: a leather-bound edition of Mrs. Dalloway. The first page was inscribed:

John: To teach and to have you learn – to share and to have you accept beauty – it has been a pleasure, and a life. We (you, and I, and the rest of us) are the university, once described “like a sailing ship always voyaging, never arriving.” Bon voyage, dear shipmate! – Ramsey

Fantastic John…as always…very inspirational…keep up the great writing…”every day”!!
Your writing brings a great deal of joy and pleasure to all !!
Ernie Santoro